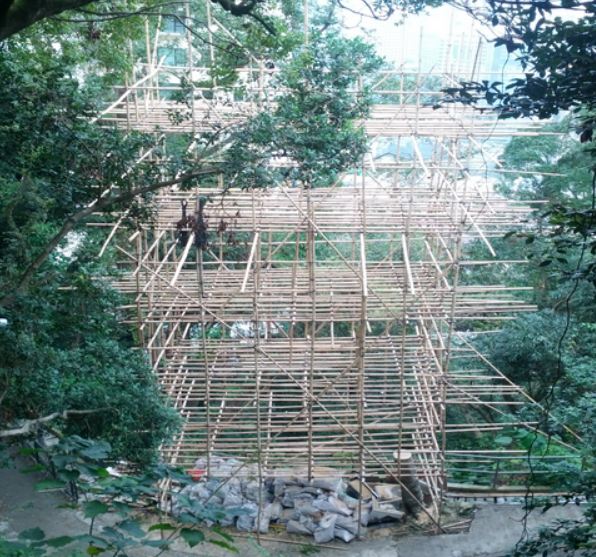 On my first visit to Hong Kong in the ’90s I was impressed with the bamboo scaffolding being used in construction. Instead of metal scaffolding you may be more familiar with, the local construction crews used bamboo that was lashed together with cord and other bits of material.

It is nice to see that this practice has not changed and seems to be more widespread than ever. The Hong Kong Building Department even offers a booklet on the subject. Now however, the lashing is done with plastic strips similar to the disposable nylon shipping straps I sometimes see on heavy boxes. The scaffolding can be built quite high and it can cantilever out over busy intersections. The hotel I was staying in this trip had bamboo scaffolding on the 41st floor. I imagine that it takes a lot of skill and nerve to erect the structures. Once the job is done, one only needs a knife to let it rain down to the ground.

I can think of many advantages of bamboo scaffolding which has allowed it to withstand the test of time; cheap, light, flexible, locally produced and green are a few. Bamboo probably also resists the elements better than steel.

What innovation could make this system better? Perhaps the bamboo could be genetically modified to be stronger under compression, more uniform and last longer. The nylon strips cold be engineered to be stronger or to indicate when they are near failure. Strain gauges could be used to monitor the integrity of the structure. Robots will one day be able to build the scaffolding, but will some other material replace bamboo by then?

Bamboo is currently being used in many consumer items. For example, bamboo is used in bicycles, shoes, cooking utensils, flooring, and the fiber is being used in fabrics (it makes a very soft cloth).