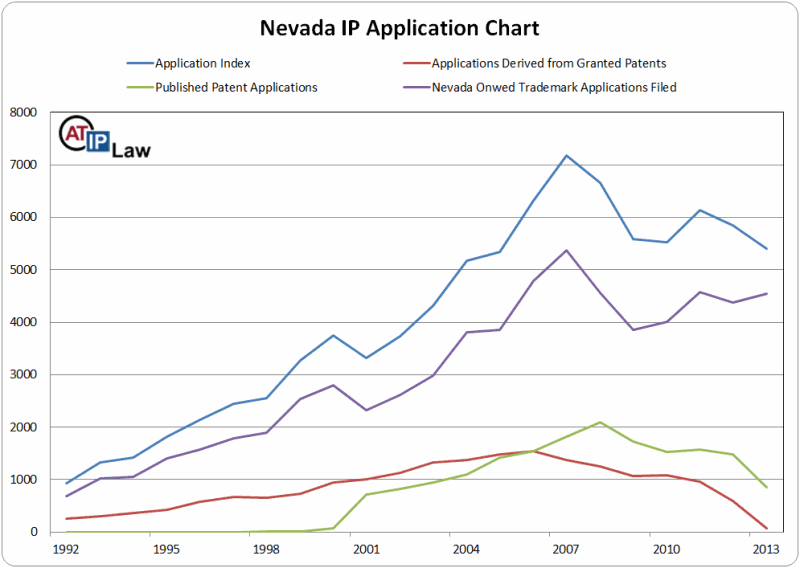 ATIP Law is happy to release the Nevada Intellectual Property Application Index (NIPAI™ or Index). The Index measures the volume of intellectual property applications submitted from the state of Nevada each year.

A chart of the NIPAI™ and its components is provided below:

As seen in the chart above, the NIPAI™ enjoyed a steady upward trend from 1992 to 2000. The effects of the “dot-com bubble” were clearly felt in 2001 when the Index decreased 17%. Nevada bounced back quickly and the Index resumed an upward trend in 2002 until it peaked in 2007.

The “Great Recession” took hold in 2008 and the Index declined three straight years; the biggest drop being 16% in 2009. In 2011 the NIPAI™ increased 14% and last year finished down by 4%. However, due to patent publication time lag discussed below, we believe the Index will be revised upward for 2011 and 2012 as new data becomes available.

The NIPAI™ tracks patents and trademark applications by the year that they are filed. This edition of the Index includes data from 1992 to 2012.

A portion of the patent and trademark applications that are filed will be abandoned for various reasons. If you are interested in approved (granted or registered) intellectual property, please see the Nevada Intellectual Property Index.

The NIPAI™ includes patent applications that list an inventor or assignee that is located in Nevada. This provides an excellent measure of innovation and inventive activity in the State.

Compared to the patent portion of the Index, the trademark portion is straight forward. The NIPAI™ includes the total number of trademark applications filed each year that indicate a Nevada owner. This is an excellent indication of general economic activity and development of new businesses, products and services. Almost every kind of business uses trademarks and new trademarks are filed when new businesses are started and new products or services are offered by established businesses.