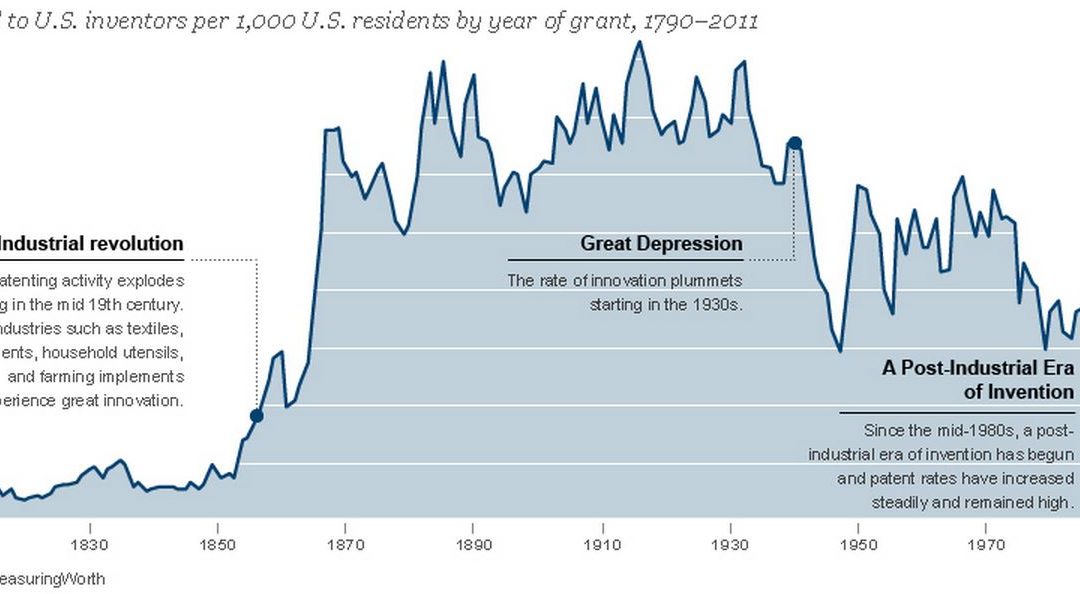 According to research performed by the Brookings Institution, the U.S. patent rate is now reaching historically high levels. Currently there are nearly 400 patents granted per 1,000 residents. This is roughly equivalent to peaks reached around 1912 and 1932.

The research shows that the rate of patenting has fluctuated dramatically over the history of the country. The patent rate was relatively low during the first 60 years of the country, but the patent rate exploded with the advent of the civil war and industrial revolution in the 1860s.

In more recent times, the decade from 1974 to 1984 saw a large decline in patents. Since then, the patent rate has climbed steadily with relatively small declines immediately following the two most recent recessions. However, the decline following the most recent recession (the Great Recession) was much smaller than the decline that followed the Great Depression (1930s). There has also been a large increase in both applications and patent grants following the Great Recession. In the near future we may see the patent rate set an all time record.

This data suggests that innovation in America is alive and well. However, we should be careful about drawing conclusions. There are a number of issues that could influence interpretation of the data. For example, it is not clear that the data only includes patents for inventions that originate in the U.S. Many U.S. patents are granted for inventions that are developed offshore and owned by foreign companies. These should probably not be counted towards innovation in America. Another factor is the recent change in the U.S. patent system to a first-inventor-to-file system. This probably caused a spurt in patent applications as companies accelerated patent application filings to be examined under the old laws.