Innovation and the Economy 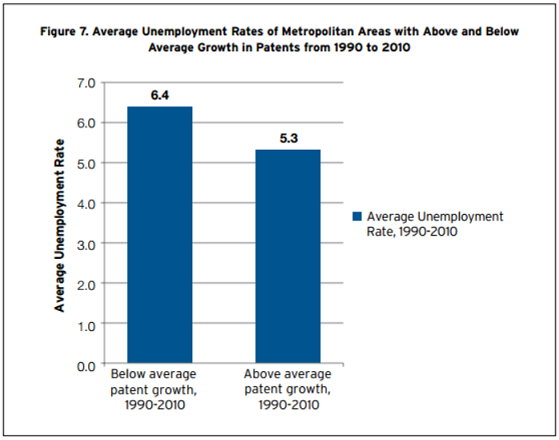 Innovation and the Economy

The Brookings Institution recently released a study in which it concluded that there is a strong connection between innovation and the economy. We have previously discussed patent rate as a measure of innovation. The Brookings study shows that in areas where there is a high patent rate there is also higher productivity growth, lower unemployment and formation of higher value publicly traded companies (creation of wealth).

The study also suggests that if low-patenting areas, such as Nevada, were able to become high-patenting areas, the average worker would have about $4,300 of additional income per year. If Nevada began patenting as much as higher patent rate areas, its economic growth would likely be boosted by 6.5% over a ten year period.

Patent claims have a larger effect on metropolitan productivity than patents themselves. This makes sense if one considers that a patent with many claims is akin to multiple patents with few claims. In fact, after accounting for the number of claims, patents do not add value to a metropolitan economy.

Every patent has at least one claim in which the patented invention is described in a legal format. Under patent law, applicants for utility patents are allowed to include a large number of claims. However, the number of claims does not necessarily have anything to do with the quality of the patent or the underlying invention.

While it is a good practice to include a number of claims, especially different kinds of claims, a strong invention can be well protected with just one claim. Furthermore, there are many weak patents that have an excessive number of claims; many of the claims being directed to trivial variations. The study also seems to ignore design patents, which have only one claim.

Therefore, the number of claims in a patent does not necessarily indicate the quality of the patent.