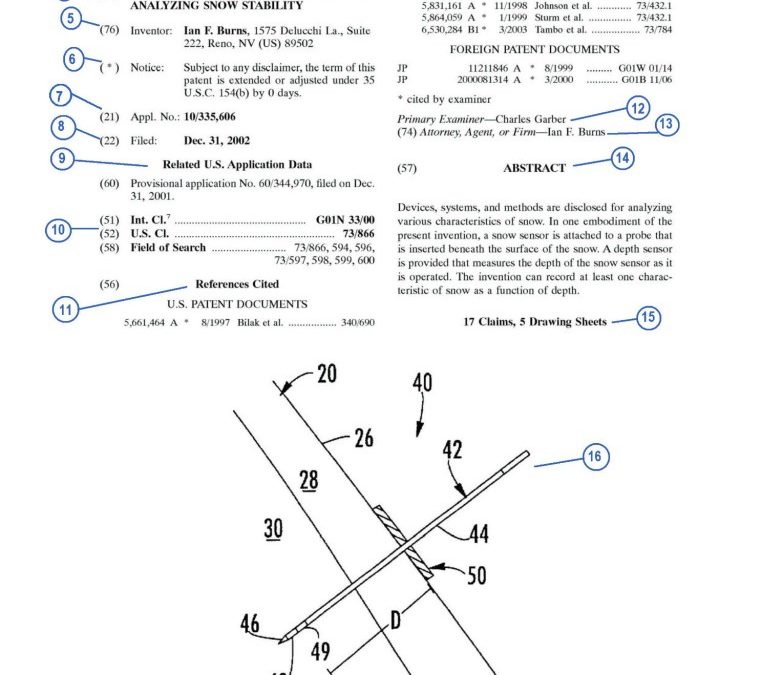 Although these issues involve analysis that should be performed by a patent attorney, a basic understanding of patents can help non-patent attorneys avoid problems, make better decisions, and communicate more effectively with their patent counsel. To understand a patent, it is essential to be able to read a patent.

How to Read Patents: Front Page 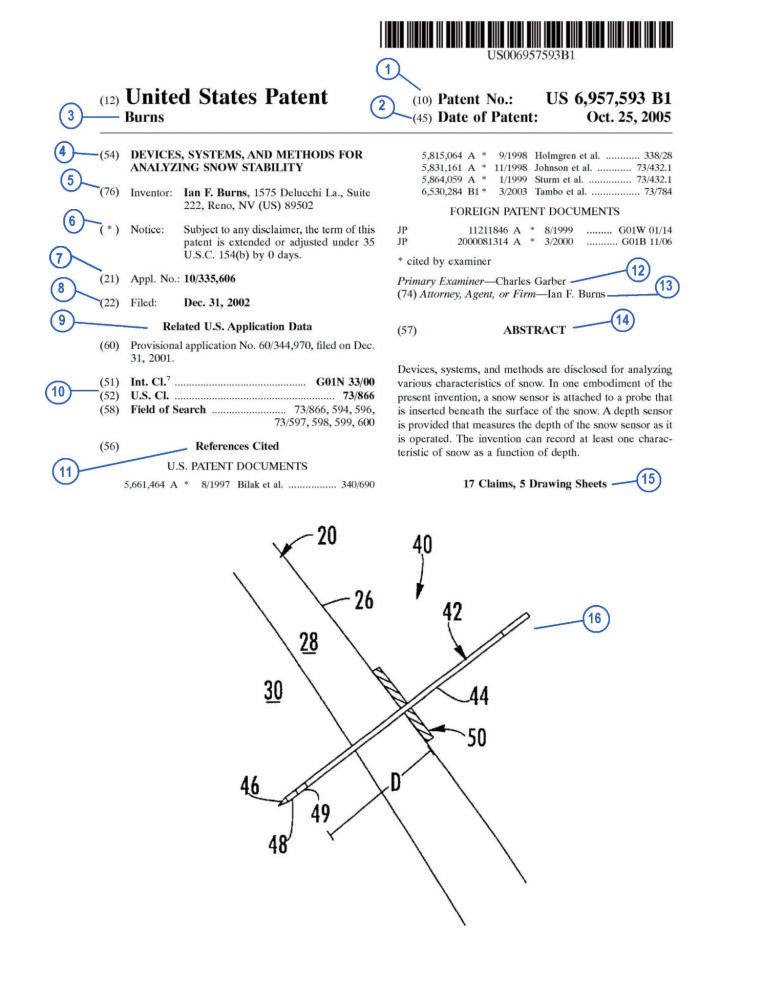 Front pages of patents are packed with useful information. But if you do not know how to read a patent, the front page can also be very confusing. This is what you need to know to get started:

Each patent is assigned a unique sequentially generated number that is used to identify the patent (see “(1)” on the example patent). Patent attorneys often refer to a patent by the last three digits of the patent number. For instance, the example patent might be referred to as “the ‘593 patent.”

Each patent has at least one inventor who is a person not a company. The last name of the first listed inventor is indicated at (3). Patent attorneys also refer to patents by the inventor name listed at (3). The example patent might be referred to as “the Burns patent.” All of the inventors in a patent are listed at (5) along with their city, state (if applicable), and country of residence.

In the case of multiple inventors, each inventor is free to commercialize the invention and license the patent without the approval of the other inventors, unless the inventor has executed an agreement to the contrary. If an applicant does not accurately provide all of the actual inventors, and the applicant does so with deceptive intent, the patent may be found to be invalid and unenforceable. It is also possible for an inventor who has been left off of a patent to sue and be added to the patent after the patent has issued.

The title indicates the subject matter of the patent. Although they are usually descriptive, titles of patents are sometimes misleading. For example, a title may be “AUTOMOBILE” and you may scratch your head and wonder how a patent could cover something as old and as broad as an automobile. But in fact the patent covers a much narrower concept, such as a self-driving car. Therefore, don’t judge a patent based only on the title.

The assignment section (not shown on the example patent) is important because it provides an indication that someone other than the inventor(s) holds rights in the patent. Rights to a patent will often be assigned (transferred) by the inventors to another person or entity before the patent issues. Most employers require their employees to assign any inventions they make within the scope of their employment to the employer. However, assignee data on the face of the patent may be inaccurate for a number of reasons. Therefore, if ownership is an issue, it is important to perform an assignment search to help determine the status of ownership rights in the patent.

The filing date (8) is one of the most important pieces of information on a patent. Either the filing date or the issue date of the patent will determine how long the patent will be enforceable. There are a number of rules that determine the term of a patent. Utility patents are the most common type of patent sought by inventors. New utility patents have a term of 20 years from filing. However, this period can be adjusted. If any adjustments to the patent term have been made, they will be indicated on the face of the patent (6).

The filing date of a patent may also be used to determine what references can be used in determining the patentability of the invention and, in some circumstances, it determines the date the patent is effective as a reference against other applications.

The International Classification, U.S. Classification, and Field of Search (10) are used to group the patent with similar technologies. The field of search indicates the classifications in which the patent examiner searched to locate prior art. This information can be helpful when performing a patent search for related inventions.

The References Cited (11) section lists selected patents and/or other publications that are in the application’s file. U.S. patent law requires applicants and their attorneys to submit all material prior art of which they are aware. If material prior art is intentionally not disclosed to the Patent Office, the patent can be invalidated in litigation.

Each patent application is examined by at least one patent examiner. The examiner is responsible for determining the patentability of the invention and approving the application for patenting. In some cases, the name of an assistant examiner may also be listed.

The abstract (14) typically gives a brief overview of the invention. The abstract is used by patent searchers and examiners as a starting point when determining whether a prior patent is relevant to an application being considered. Just as the title can be misleading, so can the abstract. Do not rely solely on the abstract to determine the scope of a patent.

In Part II of How to Read Patents, we will look at drawings, specification and claims.